Approximately every four years, the reward for successfully mining a Bitcoin (BTC) block is cut in half.

Initially, miners were awarded 50 BTC for each block mined. Then it became 25 BTC. Then 12.5 BTC. 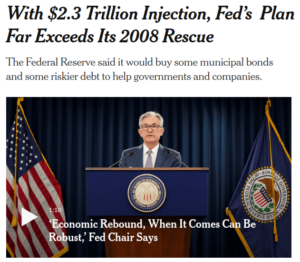 But block 629999 – the final 12.5 BTC block before the halving – contained a special and significant message.

F2Pool – the miner of block 629999 – added this New York Times headline from a few weeks ago to the coinbase of the block:

The headline is referring to the US Federal Reserve ramping up quantiative easing/money printing as a response to the economic impact of COVID-19.

You can see the block and the message here.

Including this headline in block 629999 is significant for two reasons.

Firstly, the headline’s description of the inflating fiat money supply is juxtaposed against the deflationary nature of the Bitcoin halving.

The New York Times headline highlights central banks’ ability to create as much currency as they want, whereas the Bitcoin halving represents a reduction in new Bitcoin creation. Bitcoin has a fixed supply of 21 million – and the release of new Bitcoin is progressively reduced each time block rewards halve. 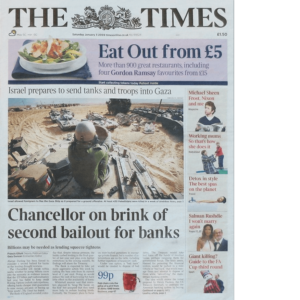 The second reason the message in block 629999 is significant is its similarity to the message encoded in the Bitcoin genesis block – the first Bitcoin block ever mined – over a decade ago.

In block 0, Satoshi Nakomoto decided to include this headline from the 3rd January 2009 edition of The Times:

“Chancellor on brink of second bailout for banks”

The expansion of the fiat money supply has accelerated significantly since the first Bitcoin block was mined. In the last 3 months alone, central banks’ money printing has already surpassed the 3 years of fiscal stimulus used to bail out the banks in the global financial crisis.

This ever-inflating supply of fiat currency (and its distribution to the ‘wrong’ people) was a big motivation behind the creation of Bitcoin in the first place:

“The central bank must be trusted not to debase the currency, but the history of fiat currencies is full of breaches of that trust.”

You can see the genesis block and this message here.

So, 11 years after Satoshi added the bailout headline to the first Bitcoin block, F2Pool has added a very similar headline to block 629999. As the saying goes, “history doesn’t repeat, but it often rhymes.”

The next Bitcoin halving will happen at block 840000, which will be mined some time around February 2024.

Who knows what headline will be encoded in that block?