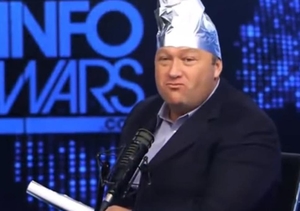 I am not a maniac. I know that’s what you’re thinking. If someone defends conspiracy theories then they are a tinfoil-hat-wearing maniac. I get it.

So let me start by saying I am, for the most part, on your side. I am a sceptic.

If you hear a crazy or outlandish conspiracy theory then you should demand a high standard of evidence before you believe it. As David Hume says: “A wise man proportions his belief to the evidence.”

But proportioning your belief to the evidence doesn’t mean rejecting conspiracy theories simply because they are conspiracy theories – and yet this is often what apparently rational people do. It’s this reflexive and dogmatic response that I want to challenge.

Discussion of conspiracy theories is often framed as a battle of two extremes: On the one side are the gullible, Alex Jones-watching tinfoilers – the idiots. On the other side are the rational and scientifically-minded deboonkers – these are the ones you are supposed to support.

And like I said earlier, I often fall into the latter camp. Just take that as read. I don’t need to spend time pointing out how stupid some conspiracy theories are because the mainstream default is to do this already1,2,3,4,5.

The assumption is that conspiracy theories are, by default, false and thus need to be debunked. For some people – even quite intelligent people – calling something a conspiracy theory is sufficient to discredit it. The very term ‘conspiracy theory’ is synonymous with ‘false’ in many minds. 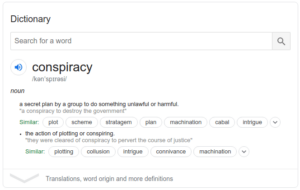 But conspiracies exist. A ‘conspiracy’ (according to Google’s dictionary) is simply ‘a secret plan by a group to do something unlawful or harmful’.

Obviously, the Illuminati fits this description – but so does a plan to rob a bank or a plan among a group of companies to fix prices. And do you really think such things have never happened?!

Taken literally, a ‘conspiracy theory’ is simply a hypothesis that a conspiracy (as defined above) exists. I know this isn’t what ‘conspiracy theory’ has come to mean in popular culture, but thinking in terms of the literal definition removes the bias that what is being discussed is automatically false. ‘Conspiracies’ exist, and so ‘conspiracy theories’ can sometimes be true.

My point here is that we shouldn’t dismiss a hypothesis simply because it is a ‘conspiracy theory’. Instead, we should steelman the theory, and then, if possible, reject that.

And when you look into conspiracy theories, you might find there is more evidence supporting them than you think. You can build a strong steel man for many conspiracies. Conspiracy theories aren’t completely arbitrary beliefs that have no basis in reality. There is very rarely a smoking gun, but there is often a fair amount of circumstantial evidence in support of the conspiracy hypothesis.

Steelmanning a conspiracy theory means accepting that there is some evidence that supports it. You then weigh that against the evidence counting against the theory and form your belief based on which side is stronger. Instead of defaulting to one extreme or the other (tinfoiler or ultra-sceptic debunker), the reasonable response is somewhere in the middle.

A spectrum of plausibility

To further illustrate this idea that the veracity of conspiracy theories is not so black and white, take a look at the following list of examples:

(The way the last few bullets are contrasted against each other probably makes it sound like these are my personal views – they’re not). 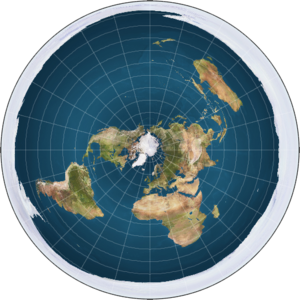 All too often, though, the sceptics and debunkers lump all these hypotheses under the general umbrella of ‘conspiracy theory’ – and all conspiracy theories are treated as though they can be simply dismissed without evidence.

As you’d probably expect if you’ve read so far, I do believe some conspiracy hypotheses are likely to be true. But I don’t want to get bogged down arguing for specific conspiracy theories here, because it would detract from the general point.

Instead, I will discuss some proven conspiracies. If you are unaware of the details of these already, then these examples might expand your conception of what’s possible.

“In order to do responsible conspiracy theorising, my first rule is that one should not attempt to allege a type of conspiracy that has never been encountered before. Over the years, many conspiracies have been uncovered. So we have a menu, if you will, of proven conspiracies with which we can try to figure out whether something is in fact possible.”

In the video above, Eric Weinstein describes a range of covert and illegal operations undertaken by US intelligence agencies – textbook conspiracies, in other words. But whereas many conspiracies surrounding the FBI and CIA remain conspiracy theories, these examples are conspiracy fact. 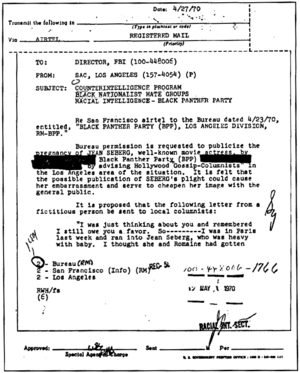 The FBI ran COINTELPRO from 1956-1971 with the aim of surveilling, infiltrating, and discrediting various American political organisations. It’s worth reading the Wikipedia page to get an idea of just how extreme the program was, but highlights include planting false stories in the media about actress Jean Seberg in order to “cheapen her image” and sending blackmail letters to Martin Luther King Jr threatening to destroy his legacy unless he commit suicide within 34 days. This is all in the public domain.

Weinstein also mentions Operation Mockingbird: a CIA program to manipulate news media. Although Operation Mockingbird is only an ‘alleged’ conspiracy, multiple sources (including the Church Committee) confirm that the CIA planted stories in the media for propaganda purposes.

But perhaps the wildest of the proven conspiracies is project MK ULTRA: The CIA’s mind control research program.

I probably wouldn’t believe MK ULTRA myself it’s that crazy. But the truth (or at least part of it) of the conspiracy is openly available in thousands of pages of declassified documents. 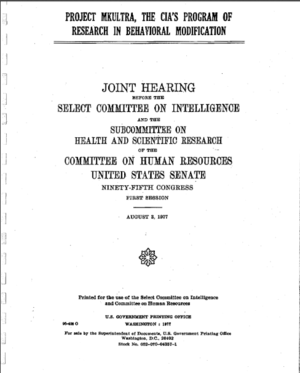 In the 20 years or so during which MK ULTRA ran, researchers conducted experiments that involved hypnosis, psychoactive drugs (in particular LSD), sexual abuse, and torture – literally anything that could manipulate subjects’ minds. It seems nothing was off-limits.

It goes without saying that many MK ULTRA subjects did not consent to these experiments, and in some cases were not even aware they were being experimented on. For example, in November 1953, US Army biochemist and biological weapons researcher Dr. Frank Olson was administered LSD with neither his knowledge or consent. A few days later, Olson jumped out of a window 13 floors up in an apparent suicide.

The MK ULTRA rabbit hole goes much deeper than Dr. Olson’s death, though. Pull up the 1977 Senate Report on MK ULTRA, turn to any random page, and you’re almost guaranteed to read something completely shocking. The thousands and thousands of pages of declassified CIA documents reveal countless demented, cruel, and downright bizarre experiments – and the revelations keep coming. In 2018, for example, newly declassified MK ULTRA documents revealed use of brain implants to make dogs run, turn, and stop via remote control.

And as extreme as these disclosed documents already are, the full truth is almost certainly much worse. In 1973, CIA Director Richard Helms ordered all MK ULTRA files be destroyed – and most were – so the declassified documents represent only a small fraction of the full story.

As shocking as Operation Mockingbird, COINTELPRO, and MK ULTRA might be, I’m not surprised such programs exist.

All three conspiracies took place during the Cold War, where the stakes were incredibly high. US authorities would have been extremely paranoid of USSR capabilities. Each side would surely have thought “if we don’t use these tools and develop these weapons, they will.” And the same is still true today.

The official story on MK ULTRA, for example, is that mind control research ended in the 1970s. And yes, any speculation beyond that which has been publicly disclosed is conspiracy theory. But is it so absurd, so tinfoil-hat-wearing, to believe defence agencies are still investigating behavioural modification and mind control in at least some capacity today? To not do so would be to hand over a significant advantage to any enemy who is prepared to pursue such avenues.

And do you believe governments run programs like Operation Mockingbird – or is that just something that happens in North Korea? If you think Western governments are above such propaganda, I suggest you look into the UK’s Integrity Initiative. And just this month it was revealed that US authorities deliberately spread misinformation about the effectiveness of face masks for preventing the spread of COVID-19.

These high-level tactics are not exclusive to governments, either. Psychopaths exist – and presumably wealthy psychopaths too. Do you really think there aren’t billionaires prepared to, say, use honeypots to discredit or blackmail their competitors? Or that no political strategist would ever consider using a false flag to gain sympathy for their cause?

None of these examples are intended to paint any particular person, institution, or government as evil or malicious. All sides are playing the same game, and when the stakes are as high as in these examples the actors have to be prepared to use any tools necessary – or else the other side will. Such tools will include:

Yeah, it reads like Alex Jones’ shopping list, but if implemented correctly these tools are incredibly effective. And given that these tools are effective, you have to expect there are those prepared to use them. As the saying goes: “All’s fair in love and war”.

If the answer to all three of these questions is yes, then the hypothesis is a reasonable one. It’s not one you can just dismiss without evidence. Don’t reflexively default to debunking the hypothesis, but instead consider the evidence with an open mind and then make your decision accordingly. In other words, steelman the hypothesis instead of being a deboonker.

The reason why I get so bent out of shape about conspiracy theories isn’t because I want to draw attention to any particular conspiracy hypothesis. I’m not at all shocked or outraged that conspiracies exist – in fact, I’d be more surprised if they didn’t.

Instead, the reason I get bent out of shape about conspiracy theories is because I believe our default response to them is symptomatic of broader issues – and it’s these broader issues that bother me.

To me, this is symptomatic of a culture that perpetuates orthodoxy and encourages dogma. Heterodox thinkers are all too often strawmanned or dismissed without evidence and I believe this is inhibiting progress in science, technology, and society in general. I have touched on this mentality in my posts on contrarian investing and Zero to One and it drives me crazy. I can’t help but feel a modern day Copernicus would be dismissed as a conspiracy theorist.

So while I have mainly concentrated on conspiracy theories in this post, the same principles – intellectual curiosity, open-mindedness, and critical thinking – apply beyond this topic. It’s important to think for yourself, look at the evidence, and remain as unbiased as possible. Never strawman views you disagree with, but steelman them instead.

“He who knows only his own side of the case knows little of that. His reasons may be good, and no one may have been able to refute them. But if he is equally unable to refute the reasons on the opposite side, if he does not so much as know what they are, he has no ground for preferring either opinion… Nor is it enough that he should hear the opinions of adversaries from his own teachers, presented as they state them, and accompanied by what they offer as refutations. He must be able to hear them from persons who actually believe them… he must know them in their most plausible and persuasive form.”