In the introduction to my book for philosophy students, I included a few words about the importance of thinking for yourself and reasoning from first principles. 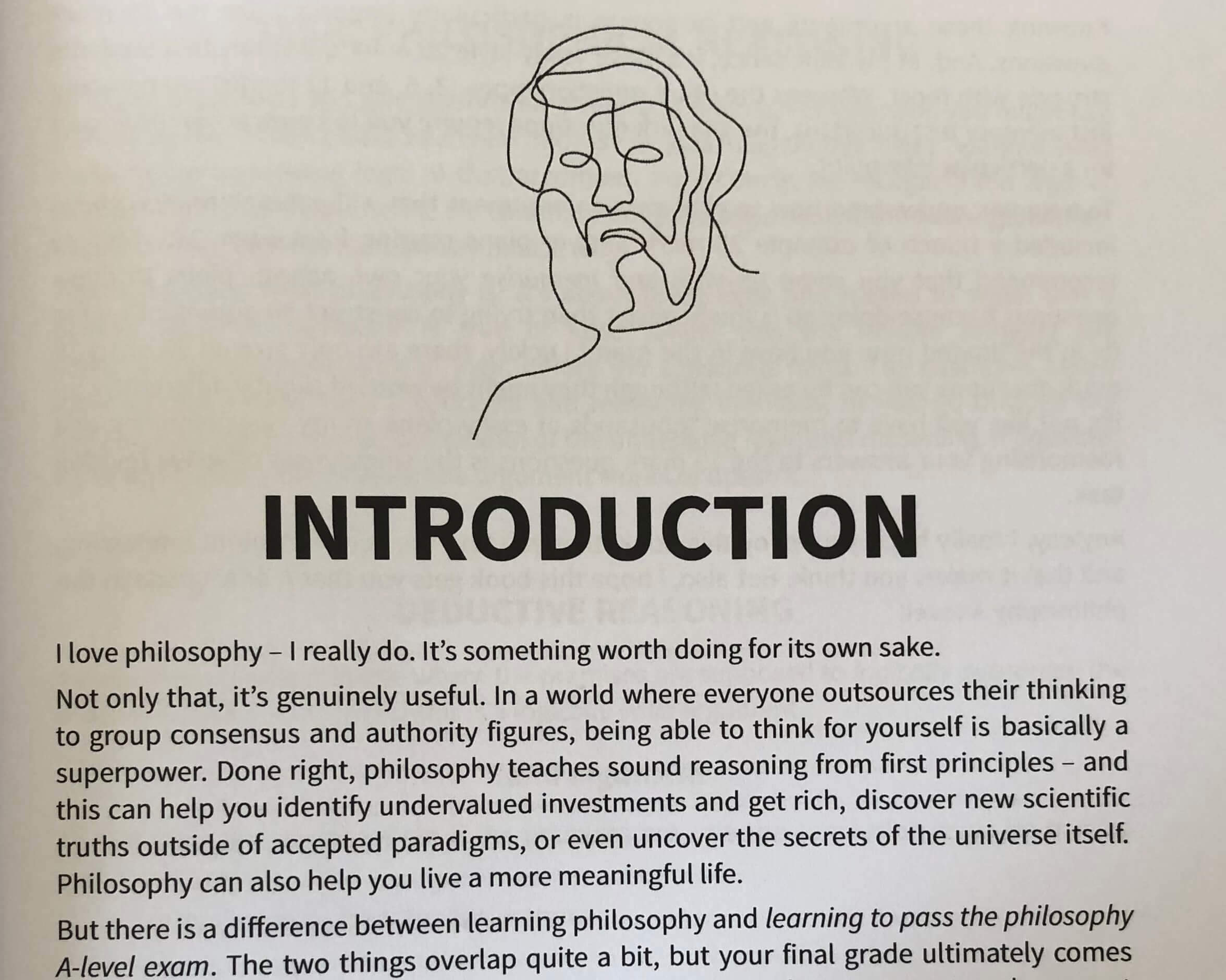 It’s not directly relevant to the course, but I wanted to include these few words because it’s a message young people really need to hear. I wrote that book and introduction in early 2021, when the Covid-19 hysteria was still at a peak. And what I had in mind – especially with the bit about outsourcing thinking to “group consensus and authority figures” – was the discussion and attitudes towards covid lockdowns and the covid vax.

I still can’t believe that period in history. The state-sponsored name-calling, bullying, and coercion over a personal medical choice – amplified and encouraged in the legacy media – was terrifying. It felt unreal, like a nightmare. All my life I’d assumed society operated according to a certain set of rules, but that turned out to be an illusion and the actual rules were the exact opposite.

There were times where I seriously wondered whether I’d be jailed or literally held down and injected. ‘Vax passports’ became a reality in many so-called free countries and the pressure kept getting more and more intense. In Austria, a supposedly first-world country in the European Union, for example, laws were passed (then, thankfully, removed) to fine the unvaxed 3600 Euros every 3 months until they gave in and got injected.

It was made so much worse by the fact that even many of my friends turned on me. I was called all the names: Selfish, anti-vaxer, conspiracy theorist, stupid, ignorant, and more. One even suggested I shouldn’t be allowed medical treatment and left to die.

It would have been bad enough if it really was as black-and-white as everyone made out – if the unvaxed really were killing people with their ignorance. Or maybe, if covid was like the black death with a 50/50 chance of dying and the thing reduced that chance to 0, the response would make sense. I’d still have defended people’s right to make their own choice in that scenario, but the authoritarianism and bullying would at least have been understandable.

But – and this was perhaps the most infuriating part – it was nowhere near that clear cut, medically.

The decision to get the covid thing (or any medical treatment) is a risk:reward calculation.

I’m not a doctor, or an immunologist, or an epidemiologist, or anything like that. But I do have a GCSE in maths!

And that basic mathematical knowledge, plus some very basic critical thinking, was all it took to make my risk:reward calculation. And, in hindsight, my reasoning was sound. I’m so glad I didn’t get the covid mRNA vax.

The safety of the covid thing (i.e. the risk side of the ratio) is a contentious one, so I’ll leave that towards the end.

In my previous post about covid, I referenced the Centers for Disease Control and Prevention’s (CDC) COVID-19 Pandemic Planning Scenarios. Although some more recent studies estimate the infection fatality ratio (IFR) to be even lower, this data was what was available to me at the time:

Translating the IFR data in Scenario 5 (the far right column) from decimal to a survival rate % (i.e. how likely you are to survive if you contract covid) gives the following figures:

But 20-49 is quite a broad category, so I also used Oxford University’s QCovid risk calculator to get a more personalised estimate. These were my results:

One thing that wasn’t asked when I filled out my details was whether I’d already had covid, which I had. I was ill for 2 days and then recovered. So, presumably, my 1 in 333,333 chance of catching and dying from covid within 90 days was even lower because I had natural immunity.

But, being ultra-conservative and assuming natural immunity doesn’t exist at all, my chance of catching and dying from covid within the next year without the thing was around 1 in 85,000.

Based on the 1 in 85,000 figure above, I probably wouldn’t have bothered to get the covid thing anyway.

But 0 in 85,000 is still better than 1 in 85,000, so there could still be some benefit from an effective vax. And early figures suggested the benefit would be exactly that: 0 chance of dying from covid. That’s what a common-sense understanding of 100% effective, or 95% effective, or whatever the early figures were would suggest (it was only later that I learned the difference between absolute and relative risk reduction).

By the time I was eligible to receive the covid thing, however, there were already hundreds of reports of ‘breakthrough infections’. It was clear the ‘100% effective’ covid vaxes didn’t necessarily stop you catching, or dying, from covid.

So far I’ve talked about efficacy from a purely selfish perspective: My chance of catching and dying from covid.

Even if I was prepared to take the 1 in 85,000 chance without the thing myself, the argument was that I could be putting other people at risk by not taking the thing. If I took the thing – even if covid wasn’t particularly dangerous to me personally – it would prevent me from spreading covid to people for whom covid did pose a serious risk.

I never accepted this argument – not so much for medical reasons (although these came later), but for logical reasons: If the thing really was as safe and effective as claimed, the at-risk people could get it themselves and be protected. This made it a personal choice for each individual to make their own risk:reward assessment.

But the medical reasons also became pretty obvious soon after: Reports of ‘superspreader events’ at vaccine-only venues, for example, or covid outbreaks on fully-vaxed cruise ships. It was clear that you could still pass on covid after being vaxed, so there was no real benefit there either.

I didn’t know this at the time, but it turns out the vaxes were never actually tested to prevent transmission:

“Get vaccinated for others” was always a lie.

The only purpose of the #COVID passport: forcing people to get vaccinated.

The world needs to know. Share this video! ⤵️ pic.twitter.com/su1WqgB4dO

I was already at low risk from covid. And the thing did little to reduce that already small risk – either for myself or others. Plus, any marginal benefits that did exist seemed to wear off very quickly (hence the push for ‘boosters’).

So for me, personally, the benefits of the thing – i.e. the reward side of the risk:reward calculation – just weren’t there.

That’s basically my personal reasoning for the risk:reward calculation up there ^

The point is: The benefits (i.e. the reward side of the equation) of the covid thing for me were so low, that any safety risk was unacceptable.

My decision was not based on a belief that the thing was particularly dangerous, but rather a belief that the benefits were so small that it wasn’t worth it. And this was true for a great many people – especially children – who were never at serious risk of getting seriously ill or dying from covid anyway. 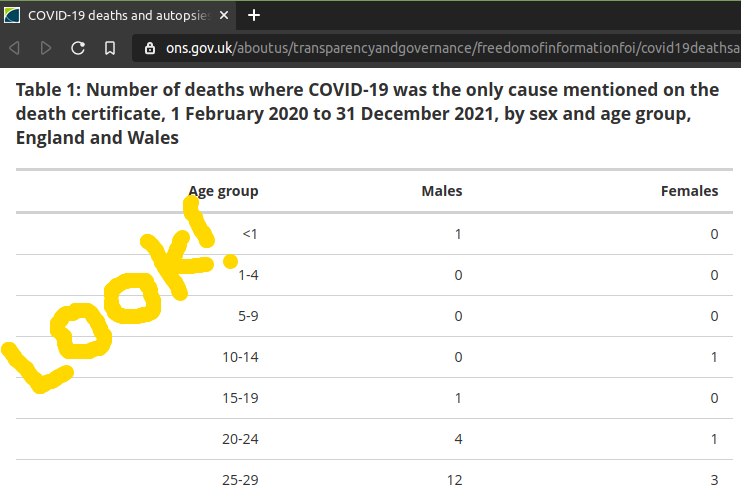 I think the rewards side has been pretty clear for a while now. But just how common adverse reactions are (i.e. the risk side of the equation) is still a contentious issue.

There is a growing and varied body of scientific and peer-reviewed (I know what a spell that phrase casts over some people!) evidence – e.g. in the form of re-analysis of the original trial data1, plausible causal mechanisms1,2, animal studies1,2, human post-mortems1,2, tons of case reports1, and large-scale observational data and prospective cohort studies1,2,3,4,5,6,7,8,9,10,11,12,13,14,15,16 – to suggest there is at least some risk. But there are also many studies that say it’s very safe. And, in fairness, given the billions of injections delivered, it’s inevitable there will be some reports of serious side effects and deaths. It’s still hard to know exactly how common these side effects are.

Data from vaccine adverse event reporting systems, such as the US VAERS and UK Yellow Card scheme, may provide some idea. But there is a debate as to how accurate these figures are. The pro-vaccine side point out how anyone can post a report without evidence and how these reports are just temporal correlations. The anti-vax side point to the proportional reporting ratio and how “it is estimated that only 10% of serious reactions and between 2 and 4% of non-serious reactions are reported”.

I think time will reveal (and currently is revealing) which side is closer to the truth. My impression is that, anecdotally, most people know of at least one person who has suffered a serious adverse reaction or ‘coincidentally’ fallen ill following injection. Perhaps the result is somewhere in the middle of these two extremes and these databases are an accurate representation of adverse reactions.

But, again, my purely logical, non-medical, argument on safety is: Even if something doesn’t cause harm, that doesn’t necessarily mean it’s safe.

That might sound stupid, but think about it: If you drive home drunk and get back without injuring anyone, does that mean your decision was safe? If you play Russian Roulette with a gun with 1/6 bullets in the chamber and survive, does that mean what you did was safe?

The covid vaxes (Pfizer and Moderna) are the first vaxes to use an mRNA platform. This is a completely novel mechanism of action compared to the standard inoculations (e.g. attenuated or inactivated viruses) most of us will have received as children. The mRNA vaxes were tested on tens of thousands of people over a period of just 3 months, after which they were aggressively pushed to pretty much the entire planet indiscriminately. Again, you don’t need a medical degree to ask the obvious question: How do we know what the long term effects are? Surely, a priori, we can see this is not a safe thing to do!

Even if the anti-vaxers turn out to be completely wrong – and I really hope they are, because people I care about had these unnecessary injections – I still can’t believe how reckless and risky this whole episode was.

“Better to wear a tinfoil hat than a blindfold”