Two things awe me most, the cosmological argument and the hard problem of consciousness.

Not as poetic as the original quote by Kant, but reflecting on these two things has caused me to change my mind about the existence of God and the nature of reality. I will try to explain why.

It’s very easy to dismiss Old Testament Bible stories that seem obviously impossible or false: an ark with two of every single creature on the planet, a man gets swallowed by whale and survives, and so on. You might see evolution as incompatible with the creation story. I’d say for many people, these kinds of arguments are the starting point of atheism.

And even if you accept that these stories are simply metaphorical, Hume’s argument against miracles presents a reasonable challenge to the central claim of Christianity: Jesus’ death and resurrection:

“When anyone tells me that he saw a dead man restored to life, I immediately consider with myself whether it be more probable that this person should either deceive or be deceived or that the fact which he relates should really have happened. I weigh the one miracle against the other and according to the superiority which I discover, I pronounce my decision. Always I reject the greater miracle. If the falsehood of his testimony would be more miraculous than the event which he relates, then and not till then, can he pretend to command my belief or opinion.”

Of course, these kinds of arguments are specific to one religion: Christianity. But there are also strong arguments against belief in God more generally. 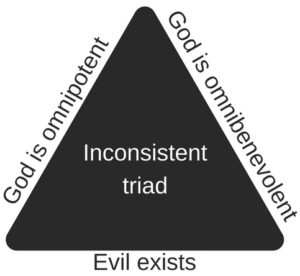 The (logical) problem of evil argues that God’s existence is logically incompatible with a world that contains evil. The argument goes that the following three claims are logically inconsistent:

The reasoning is that if God existed, He would both desire and be powerful enough to create a world without evil. But since there is evil in the world, God (as defined here) must not exist.

Another atheist argument – and a favourite of scientists – is the ‘God of the gaps’ argument.

The argument goes that, as scientific knowledge advances, the role of God in explaining things gets smaller. Eventually, gaps in our scientific understanding of the world will be so small that there will be no need for God to explain anything.

The arguments below are basically appeals to these kinds of gaps. However, they are such mysterious gaps that I am sceptical as to whether they will ever – or could ever – be explained by science.

Cosmological arguments have been made throughout history and by various cultures.

Perhaps the simplest variation is the Kalam argument, which goes:

A common response to cosmological arguments is to ask “what caused God to exist?” or “what caused the first cause?”

Another famous response is to question the first premise, that everything has a cause.

This premise seems to be true. Empirical observation within our universe suggests everything has a cause. The creation of the universe aside, there are no uncaused events. For example, chairs and tables don’t just spontaneously pop in and out of existence.

Maybe. But this response strikes me as just as much ‘God of the gaps’ as positing God as a first cause does. It replaces faith in God with a faith in some weird unknowable science.

“No fact can be real or existing and no statement true unless it has sufficient reason why it should be thus and not otherwise.”

Unlike the empirical claim that ‘everything has a cause’, the principle of sufficient reason is more an a priori intuition. Using this principle, Leibniz goes on to argue that in order to provide sufficient reason for any contingent fact (such as ‘the universe exists’), you cannot rely on an endless chain of contingent facts but must instead appeal to a necessary substance (God).

Anyway, the key point of cosmological arguments as I see it is: why is there anything at all? Even if our universe is just a simulation or part of a multiverse with many other universes, this question still stands – and it’s not an empirical one. The question of why there is anything at all seems unanswerable, in principle, without appealing to some kind of necessary being.

The hard problem of consciousness is perhaps the biggest mystery in science today. And, like the cosmological argument, there is a sense in which it cannot possibly be explained empirically.

It can be summarised as: “why do we have subjective experience?” Or, as the philosopher David Chalmers puts it:

“Why is it that when our cognitive systems engage in visual and auditory information processing, we have visual or auditory experience: the quality of deep blue, the sensation of middle C? How can we explain why there is something it is like to entertain a mental image, or to experience an emotion? It is widely agreed that experience arises from a physical basis, but we have no good explanation of why and how it so arises. Why should physical processing give rise to a rich inner life at all? It seems objectively unreasonable that it should, and yet it does. […] The really hard problem of consciousness is the problem of experience. When we think and perceive there is a whir of information processing, but there is also a subjective aspect.”

In philosophy, there is this concept of qualia. Qualia refers to elements of subjective conscious experience. So, for example, the redness of your experience when you look at ripe tomatoes or the pain you feel when you stub your toe would be examples of qualia.

The hard problem of consciousness can also be framed as asking the question: “why do qualia exist?”

Don’t get mistaken here – it is no mystery why humans and animals evolved the brain pathways to avoid, say, burning themselves on a hot fire. There is an obvious evolutionary imperative to avoid bodily damage like this.

The mystery is how and why it feels like anything at all.

Why doesn’t information processing in the brain happen ‘in the dark’? How does the light of consciousness emerge from the darkness of inanimate matter? A thermometer can detect the temperature of a hot fire, but it doesn’t feel anything. So why are we humans different? Why do we feel temperature as qualia? Why is there a subjective component over and above the information processing component? What is the point?

Qualia seem functionally unnecessary and totally unlike anything else in the physical world. This intuition is drawn out in thought experiments like Mary the super scientist and what is it like to be a bat?

In the case of the subjective experience of bat echolocation, it seems likely that this will forever be a gap in human knowledge. I could study a bat brain for eternity, learn everything about how it’s structured and how it works, and still not know what it actually feels like to see via echolocation.

We can imagine a possible universe exactly like ours – just without subjective experience. In this parallel world, humans, animals, plants, etc. all evolved exactly as they did in our world – animals flinch and scream when they’re harmed or injured, humans smile and laugh when a joke is made, etc. – but with one crucial difference: there’s no subjective component. Nothing is behind these behaviours. Everyone is just a philosophical zombie.

I’m glad it isn’t, though. Subjective experience and qualia are what make life worth living. When you listen to a beautiful piece of music or see the face of a loved one, you do really feel it. And without subjective experience, it’s hard to see how any of this could matter. Killing another human being, say, would be as morally significant as killing an NPC in a video game.

Talk of qualia often strays dangerously close into dualism, which can be a difficult position to defend. However, even the most committed physicalist has to admit that there’s something weird about it.

To my mind, there seems to be something divine about consciousness.

Why These Gaps Are So Mysterious

Returning to the God of the gaps criticism, the mystery of subjective experience and qualia is so mysterious a gap that it seems impossible to ever explain. What would an explanation even look like?

In this video, Sam Harris does a good job of explaining why it seems impossible that we could ever have a scientific explanation of consciousness that eliminates all these gaps:

“Any explanation we get about consciousness – let’s just say we open the back of the book of nature and we get the right answer about consciousness and it turns out that you need exactly 10,000 information processing units of a certain character, they have to be wired in a certain way, they have to be firing at a certain hertz, and just lo and behold that is what gives you consciousness and if you change any of those parameters then the lights go out – let’s say we knew that to be true, it still wouldn’t explain the emergence of consciousness in a way that is intuitively graspable. It still would seem like a miracle and that’s not the way most – or really any – satisfying scientific explanation works out.”

At a certain point, scientific explanation of consciousness would just sound like the restatement of a miracle. No matter how deeply you drill down into the workings of the brain, say, at some point there is this switch from talk of objective facts (facts about neurons firing, etc.) to talk of subjective experience (what it feels like) that scientific explanation seemingly cannot bridge.

It’s a similar situation with cosmological arguments, too. At some point there is a switch from absolute nothing to something (creatio ex nihilo) that seemingly defies explanation.

Maybe if you drill down far enough you can appeal to quantum fluctuations or some other weird physics to explain spontaneous physical events. Many atheists seem comfortable accepting the idea that a universe could spring into existence from nothing in this way. This doesn’t address the problem, though, because it already assumes the existence of something: Contingent physical laws that allow a universe to spring into existence like this.

At my most militant, I would have identified with strong atheism: a positive belief that God does not exist. Over time, this gave way to weak atheism: a lack of belief in God.

Now, though, I’m not so sure about even weak atheism.

This uncertainty could be considered to be an agnostic position, but I don’t think that’s accurate either. One definition of agnosticism is a belief that nothing can be known about the existence or nature of God. However, the arguments discussed here – the cosmological argument, the problem of evil, etc. – suggest that we can learn about the existence and nature of God. These arguments may not be conclusive, but they do suggest that something – however little – can be known of God’s existence (or lack thereof).

Deism is perhaps the conclusion that best follows from the arguments discussed here. Deists believe that God exists and is ultimately responsible for the creation of the universe but that He does not directly interfere with this created world. This position would accommodate the logical problem of evil as well as the cosmological argument and the hard problem of consciousness.

Whatever the label, my point is that there are two mysteries so utterly mysterious and so inherently good that they strike me as divine miracles: the existence of the universe and the existence of consciousness.