While browsing YouTube the other day, I came across a video: The Greatest YouTuber of ALL TIME — h3h3 reaction video.

And like Ethan, I was totally fascinated by the weird world of Ryan Jaunzemis. 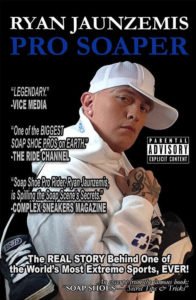 Jaunzemis is best known for his career as a pro soaper. But there’s so much more to the story than that.

Soaping is an extreme sport that was briefly popular in the late 90’s/early 00’s. Soap Shoes have a concave plastic plate on the sole that enable the wearer to grind down rails without a skateboard. It’s kind of like inline skating without wheels.

Jaunzemis is more than just a pro soaper, though. He’s also an author, a martial artist, a pickup guru and gangster rapper. He’s even starting his own world religion. And he covers all these topics on his YouTube channel.

The first thing that hits you is the early 00’s aesthetic. Jaunzemis is 2001 personified. The flame writing, along with everything else on the channel, takes you back to the days of dial-up internet, JNCO jeans and Blink 182.

But unlike those things, Jaunzemis’ channel is still very much alive in 2018.

“Besides being a pro skater and a pro soaper, I also wear a lot of other hats as well.”

The thing that impresses me most is the sheer amount of content.

The guy is prolific. Jaunzemis has created more than 500 YouTube videos – many of which are over an hour long – covering this impressive range of unrelated topics.

Whatever you think of him, Ryan Jaunzemis is a guy who’s made a living from doing what he’s passionate about. I’m always drawn to bizarre stories and interesting characters so I was keen to find out more about the man behind the spiked bracelets, tattoos and Soap shoes.

I reached out to pro soaper, gangster rapper and ‘Las Vegas’ most aggressive dating and seduction coach’, Ryan Jaunzemis, to see what he has to say.

CF: You’ve done a lot of stuff – pro soaping, inline skating, music, YouTube videos, martial arts, book author, ultra running, pickup artist – if you could only do one of these for the rest of your life, which would you pick and why?

Ryan Jaunzemis: I couldn’t just do one thing. I’d go mad. Lol. I get bored very easily and that’s why I need to switch things up every few days. I’m very passionate about all the stuff that I’m into but I find if I do something too much for too long it just becomes like a job and loses its allure. I just go with how I feel. And that usually changes day to day, week to week, season to season.

CF: Nah dude, you can’t get out of this one! Someone puts a gun to your head and you can only pick one, which do you go for?

CF: I guess that means you’d rather die than give up any of your interests.

Ryan Jaunzemis: Pretty much, yeah. If I was stuck to only be able to do one thing I’d just say pull the trigger cuz it would take all the fun out of life, and would also majorly water down the brand. I’m a guy who needs to be free and live life on my own terms.

CF: You’ve written 10+ books, produced multiple music albums and created more than 500 youtube videos. You’re still soaping long after the company went out of business. How do you stay motivated?

Ryan Jaunzemis: I stay motivated mostly by my own self interests and trying to be the best that I can be. I don’t focus on anyone else, or what anyone else is doing, I don’t complete with anyone else, I just try to become the best version of Ryan that I can be, and do better than I did the day before. I work hard every day, 7 days a week, trying to make it. Not just in one avenue as a soaper, or a rapper, singer, songwriter, producer… or an author, or a dating coach, model, actor, martial artist, entrepreneur, ultra runner, etc., but as overall talent. A virtuoso. A GOAT. The guy who does it ALL. I just gotta do it BIG man, and represent. And hopefully people is feeling my shit. 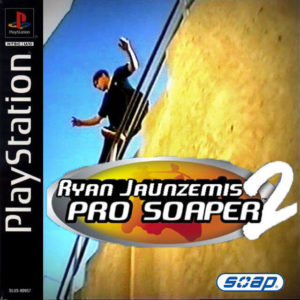 CF: You’re clearly passionate about soaping. As an entrepreneur, have you ever thought about re-launching Soap shoes yourself?

Ryan Jaunzemis: Hell naw! Lol! Funny enough, a lot of people over the years have asked me that question, and I tell them all the same thing, which is I have no desire, what-so-ever, to be a shoe salesman. I’m Pro. I belong in the streets grinding down handrails, jumping down stairs, and doing professional modeling photo and video shoots, traveling around the world on tour, and being on TV and on the covers of magazines, not behind a desk in some office selling shoes, and dealing with sales reps and warehouse shipping supervisors, or any of the business-type politics. That stuff is great for someone who wants to make money, sure! But that’s just not for me. I’m into the fame, the glory, and getting hot girls to notice me. I’m only into being the star, or the poster boy, or the brand ambassador, or the name and face, or spokesman, of a company.

CF: In a few of your videos you mention that you’re banned from the UK. What’s the story behind that?

Ryan Jaunzemis: Unfortunately, I can’t discuss that openly at this time due to certain legal restraints, but I do discuss it in detail in my new book, Master Pick-up Artist, which is due to be released sometime late in 2019. But, Yes, I am banned from the United Kindgom; England, Scotland, Ireland, and Wales, and subject to arrest upon re-entry. All I can say at this time is that I was arrested on 7 different criminal charges and after I was released from solitary confinement I fled the Country before my next scheduled court hearing which violated my terms of probation. I believe there are ways of reconciling the situation however it would have to be done through the British consulate in Los Angeles and the appeal process would literally take weeks or months so I’ve heard and I don’t live in California anymore, I live in Nevada so I would have to either stay in California long-term or travel back and forth which would just be a nightmare. 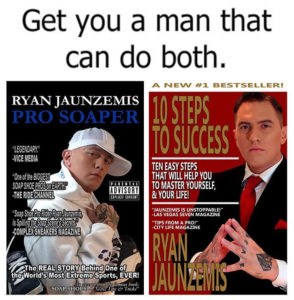 CF: Could you tell us a bit more about the world religion you’re creating? What is it called? And how is it going?

Ryan Jaunzemis: I’m in the process of writing a book called The Purpose of Life which basically discusses our biological imperative as a species, which is simply to survive and ultimately reproduce before your finite allotted time on this planet expires. Essentially we humans have approximately 28,251 days to live; about 77 years for females and approximately 75 years for males. In that time one must essentially build enough value for themselves (in terms of attractiveness), in order to attract a mate and procreate before you die in order to get your genes into the next generation, otherwise, in terms of evolution, you’re history. The book is still in its infancy stages and will probably not be released until around 2025 or so as I have way too many other projects on my plate which need to be completed first. But essentially if I was to break it all down the purpose of life is to fuck, and to make babies (at least once before you die), And then those babies need to also make babies before they die and so on and so forth to continue the cycle of life. If the chain is broke then your genes will be evolutionarily weeded out of existence, thus leaving room for more stronger and dominant genes to survive.

CF: What happens if gene editing becomes a reality? Test tube babies, etc. What is the purpose of life then?

Ryan Jaunzemis: It will evolve our species to a new level. Stem cell research. Bionic implants. Cybernetics. Artificial intelligence. Robotics. Transhumanism, artificial insemination. I talk about all that stuff in the book. All inevitable ways of human development & progress. I probably watch too much Star Trek. Lol. But, yeah, I’m into all that weird shit. I read a lot. I’m actually a total nerd.

CF: What advice would you give to the younger generation?

Ryan Jaunzemis: Enjoy things for their entertainment value. But do your own research. Don’t believe everything you read on the Internet.

CF: And finally, what’s next for Ryan Jaunzemis?

Ryan Jaunzemis: Just trying to get my stuff out there. Gotta keep pushing forward… one day at a time. Gotta make it happen.

Big thanks to Ryan for taking the time to chat. For more #SoapLife, check out his Instagram page and Youtube channel.